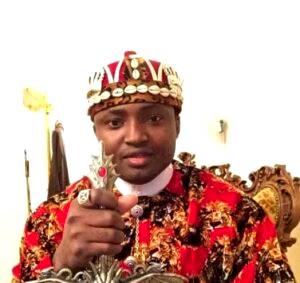 Mikar Ojokoro, a human rights advocate, has condemned alleged threats and defamatory comments made by Simon Ekpa against Ifeanyi Ejiofor, a legal counsel to IPOB leader Mazi Nnamdi Kanu, as offensive and unacceptable.

Ojokoro accused Ekpa of “dishing out tissues of lies on social media about Ejiofor and the IPOB leader through his blog for the purpose of maligning Kanu and his legal team” in a statement made available to Vanguard.

According to him, Ekpa was quoted on YouTube as saying, “We have sacked DOS; Ejiofor and the legal team have compromised.” Ejiofor and DOS are both employed by the Nigerian government. We don’t take orders from anyone in the DSS dungeon,” he said, referring to Kanu and mocking Kanu’s orders to end the sit-in.”

Biafra House is inaugurated in the United States – Source
Buhari congratulates Archbishop Onuoha, President-elect of the CCN.
While praising Ejiofor for being a brilliant and courageous lawyer who has risked his own life to defend Kanu and thousands of Igbo young men and women, the activist stated that a few defamation suits would soon be “filed in the courts against Ekpa and his co-traducers.”

“Sir Ifeanyi Ejiofor and his team of lawyers have been defending Mazi Kanu and thousands of others identified as Biafrans in cases that most lawyers in Nigeria would not want to touch for fear of being targeted by Nigerian government forces,” according to the statement.

“There is video evidence and court judgments that show Ejiofor and many of his clients, who have been identified as indigenous Biafrans, have been victims of police brutality on numerous occasions.” Many believe that the most recent lethal invasion of Ejiofor’s home at night, shortly before Kanu was kidnapped, was intended to scare away other lawyers from defending Kanu if Ejiofor is out of the way.

“With all of this, I find the actions of some gullible Igbo who are applauding the threat against Ejiofor to be very offensive and unacceptable.” Are some Igbo people this erratic and capricious, with no emotional intelligence to decipher a series of contradictory lies and deceptions sold to them by Ekpa?”

Ojokoro also stated that Ekpa has been plotting to depose Mazi Nnamdi Kanu and seize control of IPOB. According to him, he has been launching vitriolic attacks on Kanu in order to achieve this singular goal, but he lamented that only the gullible would see the deception and lies in the information he has been disseminating.

“Simon Ekpa has been laying the groundwork to attack Mazi Nnamdi Kanu, and he is already doing so in such a constructive reversed psychology through a number of his YouTube broadcasts, where he said Kanu would end up like Raph Uwazurike and that he is the better anointed David than Kanu, whom he labelled as Saul.” He also boasted that he had accomplished something that Kanu had never accomplished and that Kanu needed him more than he needed him.”

He recalled how Ekpa insulted the Catholic Bishop of Enugu Diocese, Rev Dr Enoja, who had tried to call Ekpa to order through his spokesperson over the senseless and criminal enforcement of the sit-at-home, which Kanu had ordered from the DSS detention to stop.

Instead of listening to the bishop’s wise counsel, he boasted that he would not take orders from anyone in DSS custody and that his own version of IPOB called Autopilot was the original.

He bemoaned Ekpa’s use of Kanu’s ordeal to spread unfounded lies about the IPOB leader, while anyone who tried to call him to order was labeled a traitor.

Ojokoro also warned Oduduwa Republic agitators like Prof Banji Akintoye and Dr Sunday Adeyemo to be wary of some people who pose as autopilots and Biafra spokesmen, saying that “such ectoparasitic names and positions only exist in the criminal world but are non-existent in the actual Biafra independence restoration movement led by Kanu.”

The rights advocate accused Ekpa of deceiving the teeming Igbo population that believes in the realization of Biafra, dismissing the self-proclaimed autopilot leader’s comment that Biafra would come in 122 days or less.

“I’ll be a fool if I don’t ask the person how that would happen, the strategy, and the process.” This is not to say that we do not believe in miracles or understand spiritual things; we do, but that is not the point here. “It is insane for Ekpa to claim that he will bring Biafra to reality in 122 days while also calling for a conference to teach Biafrans how to seek asylum in a foreign land,” he said.