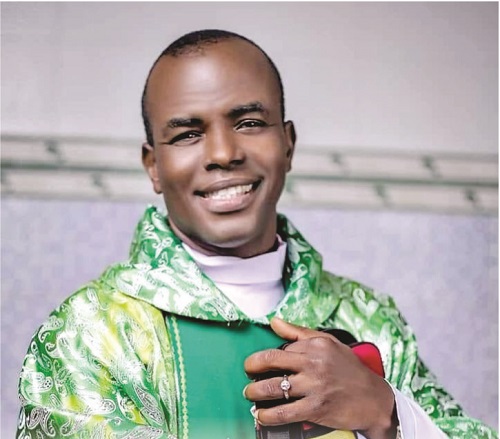 Mbaka, who was sent to the monastery for several months, has resumed at his Adoration Ministry, Enugu.

The youths said it was heartwarming to see Mbaka return at the time the nation needed his spiritual guidance and prayers.

The National President of the youths organisation, Mazi Okwu Nnabuike, said Mbaka’s voice was missed during the days of killings in Eha-Amufu, Isi-Uzo Local Government Area of Enugu State and other parts of the country.

“It was a period we will never forget, with several natives gruesomely murdered by herdsmen.

“The absence of Mbaka was evident; his loud voice on issues of that nature was greatly missed during that period of carnage. We know that he would have delivered humanitarian assistance to the displaced people of Eha-Amufu just like that he did during the Nimbo massacre.

“This is why we are happy that he is back; we welcome him and urge him to continue his role as the voice of millions of oppressed Nigerian people. He should continue his charity which is benefiting millions of people.

“No level of intimidation should make him lose his voice in his role as an advocate of the masses,” Okwu stated.