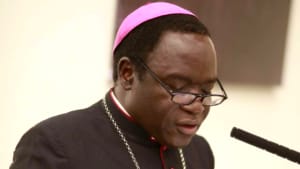 Bishop Matthew Hassan Kukah, Catholic Bishop of Sokoto Diocese has hitted President Muhammadu Buhari on his war against corruption, but commended his efforts in the area of infrastructures which he said has been tremendously improved.

Bishop Kukah acknowledged that, there has been a measurable improvement in the landscape especially in the area of roads and railway .

In his Christmas message delivered at St. Mary Catholic Church, Sokoto, titled “Let us turn a new leaf,” Bishop Kukah remarked that, “it is sad that despite your lofty promises, you are leaving us far more vulnerable than when you came, that the corruption we thought would be fought has become a leviathan and sadly, a consequence of a government marked by nepotism.

“In my Message last year, I pointed out that you had breached the Constitution by your failure to honour and adhere to the federal character provisions of our Constitution. Thus evidence is all before us all.

“Nepotism is a cancer which has consumed us in the last few years. We have paid the price of nepotism entrusting power into the hands of mediocres who operate as a cult and see power purely as an extension of the family heirloom.

“Before our eyes, the capital letters that spelt Nigeria are falling to the pressures and irruptive forces of primal ethno-religious nationalisms. Before our eyes, a dubious jihadist culture has held our nation to ransom with the government simply looking away.”

To his critics, Bishop Kukah said, “l have listened as the President’s Friday men, wearing their laurels won from chasing shadows, have accused me of attacking the President, or not being a patriot. Some even went to the length of accusing me of being against Islam or the north. The important thing is that none of my critics has quarreled with my facts.

“For example, who will quarrel with the fact that our glory has departed as a country? Where is our voice respected today even within the African continent which looks up to us for leadership? Unless we count lining up behind others for handshakes across Europe and America as achievements, we will be remiss not to worry about our declining global influence.

“Is being the poverty capital of the world and one of the most violent states in the world an achievement? And our suffocating internal and international debts? And you do not think our glory has departed?

“In the light of this, I wish to appeal to all Nigerians who have been given custody of our public trust and commonwealth to rise up to the duties for which they have been so handsomely rewarded. Those holding elective office must appreciate that they have not been entrusted with the keys of our commonwealth just so they can turn it into their private money machines.

“History will record them and their roles, how they used the great opportunity God gave them among millions of other citizens to witness to Him and to do good.”

While urging members of the political class to demonstrate their grasp of the length and breathe of the problems that our country faces, Bishop Kukah said, “we have heard your promises, but we do know that promises before elections are sweet, but actions after elections are often bitter.

“I plead with you Mr president to co-operate and collaborate with institutions which are tasked with the responsibilities for these elections, INEC, the Security agencies, the National Peace Committee, Civil Society Organisations and the entire people of Nigeria.

He said the citizens were already overwhelmed by violence which make there future hangs in a balance.

“Seek to create a vision that can unite our country. Learn the mistakes of the past especially in the areas of managing our diversity and designing and effective mechanism for power sharing.” Bishop Kukah advised.

During the dry season, NCAA warns pilots and airlines about potentially hazardous weather