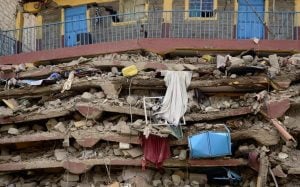 The Nigerian Association of Technologist in Engineering (NATE) leadership has identified cheap and inferior materials as major causes of building collapse in the country’s nooks and crannies.

Other causes identified by the union include incorrect design interpretation, greed, the use of plans approved for another site, the nature of the soils, and the structure.

The association, which made the above observation over the weekend in a communique distributed to journalists in Jalingo, Taraba State, shortly after their 38th Annual General Meeting in the state, was also observed to have urged the federal government to immediately end the heinous trend of disparity between HND and BSC currently practiced in Civil Service.

The communique, read out by the association’s national President, Dominic Udoatan, stated that abandoning such practices would allow HND holders to advance beyond Grade level 14.

The practices, as revealed in the communique, have begun to stymie the country’s much-anticipated technological breakthrough.

They claim that the practice is “quickly killing the morale and, as a result, the skills of some workers who could have been used to bring about the much-needed technological transformation in the country.”

They warned citizens to stay away from human activities, focusing extensively on climate change, global warming, and desert reclamation.

They were also observed to have recommended that measuring the ecological footprints of solid waste management is a very good way to reduce the unstable human activities that are causing global climate change.

The association, which appears to be dissatisfied with the federal government’s alleged relegation of engineers to the background, argued that for successful technological development to be recorded anywhere in the world, the activities of engineers, technologists, technicians, and craftsmen must be harnessed.

It is unfortunate that the ratio of engineering personnel to population served is far below the ratio of 1:1000, which they claim prevents meaningful engineering infrastructure and development in the country.

They urged the federal government to go the extra mile to encourage local investors who had invented and developed useful machines on their own but had not been granted patent rights.

Advertisement
Related Topics:inferior materials as major causes of building collapse in Nigeria.Others identified cheap
Up Next