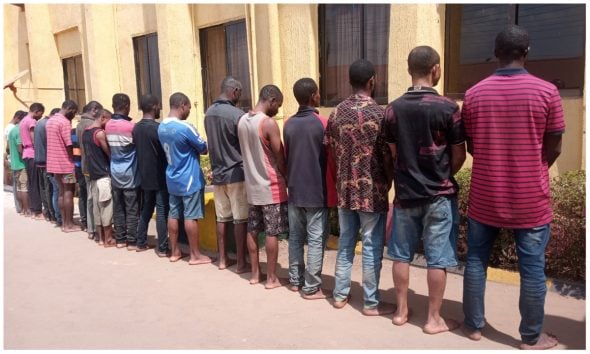 Ebonyi State Police Command on Monday paraded one Ebubeagu Commander, Nnamdi Omeoha and twenty-five (25) other suspects over alleged killings and wanton destruction of valuable properties, including the house of the All Progressives Congress, APC, Chairman, Stanley Emegha.

The Commissioner of Police, Aliyu Garba through the Command’s spokesperson, Chris Anyanwu said the suspects were arrested in connection with the killings and razing of houses on 26th of December 2022.

According to the police: “The key actors among the suspects arrested volunteered useful”confessional statements” that exposed the aggregate of overwhelming findings hereunder outlined:

“The fracas that engulfed Ekoli-Edda on 26/12/2022 ignited at about 1600 hours during a face-off between the security aides of Hon Stanley Okoro Emegha versus a faction of Ekoli-Edda youth believed to be loyalists of Hon Eni Uduma Chima.

“The protracted political rivalry/ supremacy struggle between the duo is the cause of the showdown that took place. Interestingly, the two political stalwarts hail from the same community, belong to the same political party and even live in close proximity

Advertisement
Related Topics:25 others for crisis in Ekoli Edda communityPolice nab Ebubeagu Commander
Up Next