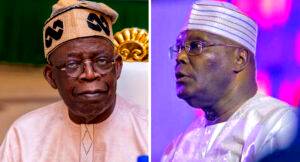 However, Tinubu, speaking at the launch of the Delta APC governorship campaign in Warri on Saturday, claimed that Atiku fought Obasanjo during their tenure.

“Our competitors have no shame,” he said. How can they think of governance when they are fighting in public?

“When Atiku was there, he was publicly fighting his boss.” They were telling us about how they spent their money on cars for their girlfriends. Do they feel shame? Will you vote for them again? Tinubu asked the cheering crowd.

“Tinubu assured Nigerians that the APC will deliver on its promises if it wins next year’s elections, as he redoubled his accusation that the PDP failed the country,” he said.

“I will commit to your progress and keep all of my promises to you.” You are the country’s future, as well as its heart and soul.

“Your environment is just as vital as gold mining.” Your health, well-being, and dreams for a stable and prosperous Nigeria will be realized.”

The current House will host the Kingdom Summit in 2022