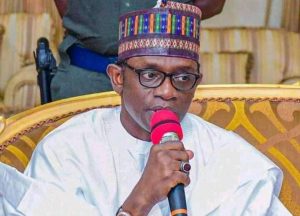 Yobe State Governor Mai Mala Buni has warned political parties in the state against using violence and hate speech during the general election campaign in 2023.Buni issued the warning in Ngalda, Fika Local Government Area, while flagging off the North-East Development Commission’s Phase 1 construction of a 54-kilometer Ngalda-Mutai road.He also directed candidates for various political positions to focus on issue-based campaigns that would promote peace and harmony in the state.”Let me take this opportunity to urge politicians from all political parties to avoid all forms of violence, incitement, and hate speech during their campaigns.””We should focus on campaign-related issues that will benefit our beloved state,” he said.The Governor, on the other hand, praised President Muhammadu Buhari for establishing the North-East Development Commission (NEDC), as well as the Commission for the road project and other initiatives aimed at improving people’s living standards in the state.”Obviously, the construction of this road would open up the rich agriculturally endowed communities and facilitate the easy movement of people, goods, and services to stimulate more agricultural, commercial, and economic activities in the benefitting communities,” he added.

Related Topics:2023: Governor Buni speaks out against violenceHate Speech
Up Next