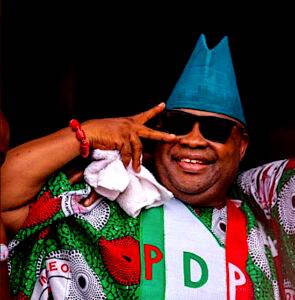 This was in accordance with the Tribunal Chairman, Justice Tertsea Kume’s, order on November 25.

Kume had ordered INEC’s National Chairman to produce Form CF001 after INEC’s Osogbo office stated that the documents were not in its possession, but rather with its headquarters in Abuja.

Prof. Paul Ananaba, Lead Counsel for INEC, informed the court that the order had been followed and that the documents had been brought from Abuja by Mrs Joan Arabs, Deputy Director.

Arabs then presented the documents to the court, which admitted and confirmed that the documents were produced in accordance with the order.

However, after going through the two-page documents, Mr Lateef Fagbemi, Counsel to the petitioners (APC and Gboyega Oyetola), told the tribunal that the documents produced by INEC (Form CF001) were not legible and could not be used to prosecute their case.

Fagbemi stated that they paid N305,000 for the documents and that the first document, West African Examination Council (WAEC) – General Certificate of Examination (GCE), has no information/results on it and only the signature at the bottom is legible.

He also stated that the second document, School Testimonial, obtained by Adeleke from Ede Muslim Grammar School, does not include the school’s address or location.

Fagbemi testified in court that the documents could not be used or managed because they were not clear and legible.

The counsel for the petitioners urged the tribunal to take note of their objections to the documents produced by INEC.

Kume upheld the petitioners’ objection and ruled that the respondent (INEC) had not fully complied with the tribunal’s order to produce Form CF001, citing legibility issues in the documents produced.

The tribunal’s chairman then directed INEC to produce clearer and more readable copies of the documents.

Following that, INEC counsel requested that the tribunal allow it to snap the documents in their custody in Abuja and forward them so that the hearing could continue.

Kume then granted the request and allowed INEC one hour and thirty minutes to obtain the documents.

After the break, Ananaba stated that INEC Abuja had taken a screenshot of a copy of the documents, which he printed and presented to the tribunal.

Kume, on the other hand, claimed that the copies were no better than what the INEC Deputy Director had brought.

Following the petitioners’ and respondents’ counsel’s arguments and submissions, they agreed that the original file containing the Form CF001, which is in INEC custody in Abuja, be brought before the tribunal next week.

The tribunal chairman expressed regret that the respondent (INEC) could bring uncleared and blurred copies of the petitioner’s requested documents.

He stated that it was agreed that sittings would be held on weekdays, weekends, and even public holidays beginning with the Tribunal’s pre-hearing.

Kume then postponed the next hearing until December 3, requesting that INEC produce clean and clear copies of the original file containing Form CF001.

He stated that if INEC did not comply with the order, the tribunal would be forced to use its powers.