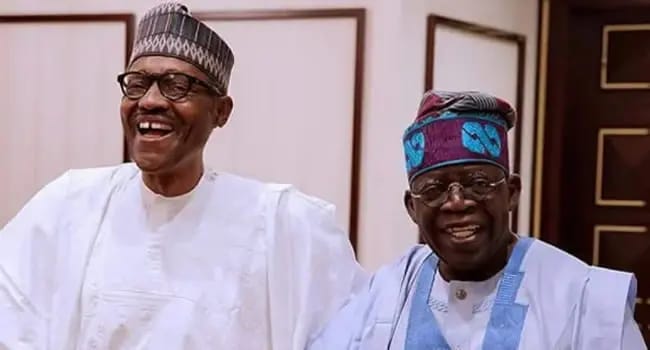 Asiwaju Bola Tinubu, the All Progressives Congress (APC) presidential candidate, has compared President Muhammadu Buhari to leaders such as Charles De Gaulle of France, Franklin Roosevelt of America, and Winston Churchill of the United Kingdom.
According to Track News, Tinubu stated this on Saturday at a private dinner hosted by the President’s family and close associates to commemorate his 80th birthday, dubbed “Celebrating A Patriot, a Leader, an Elder Statesman.”

The APC flagbearer stated that he compares President Buhari to those great leaders because he has sacrificed and committed so much for Nigeria’s progress and unity.

Tinubu stated that Nigerians have faith in Buhari’s leadership because of his commitment, dedication, patriotism, and honesty, and that the country has changed since his election in 2015.

As a result, if elected president of the country in 2023, he promised not to disappoint President Buhari and prayed that God would continue to spare his life so that the country could progress.

“You have been at the helm of this country’s affairs at a critical time,” he said. We have witnessed a life of dedication, patriotism, and honesty. Mr. President, you have served your country admirably. Our country has noticed the difference in your leadership.

“Your leadership has reminded me of the speech you gave at the Primary Convention when you were nominated.

“You thanked the people humbly and stated that even if you had the money, you would not have paid. They recognize you as a man of integrity, great commitment, transparency, and exceptional humility.

“God will continue to spare you to see the history as you want it for the country, the ship of this nation will be on the right course. You will live long enough to enjoy a pleasant evening of democracy that you helped to create.

“When you talk of PVC, card reader, transparency, and honesty in the electoral process like you did, we can only promise not to let you down. “Enjoy being 80 until your next birthday.”

Advertisement
Related Topics:Tinubu Tells Buhari: "You're on the same level as Franklin Roosevelt and Winston Churchill."
Up Next

You Won’t Spend Next Xmas On Petrol Queues — Atiku