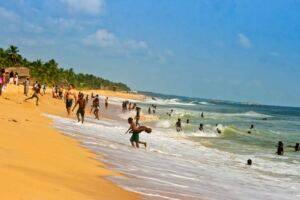 On Monday, two unidentified fun seekers drowned while attempting to save another person from being swept away by the strong current at Baracuda Beach, Abraham Adesanya, Ajah area of Lagos State.

The victims were among the revelers and beachgoers who flocked to Lagos the day after Christmas for the Boxing Day Celebration.

As of 11.30 a.m. Tuesday, when this report was filed, the bodies of the victims had yet to be recovered.

“The Agency responded to distress calls about an incident at the above location,” Oke-Osanyintolu explained (Baracuda Beach, Abraham Adesanya, Ajah).

“When police arrived, it was reported that two beachgoers had drowned.

“Further investigation revealed that two adult males died during a failed rescue attempt on a third adult male,” according to the report.

“The victims had crossed the red line, according to the lifeguard on duty at the beach. Solo rescue is prohibited beyond these limits, which is why he was unable to attempt it.

“The agency’s LRT and paramedics, on the other hand, are already on the scene.

“The search and rescue mission is still ongoing.

Related Topics:according to LASEMABoxing Day tragedy occurred when revelers drowned on a Lagos beach
Up Next

Despite a new bridge, the Niger River crossing remains congested