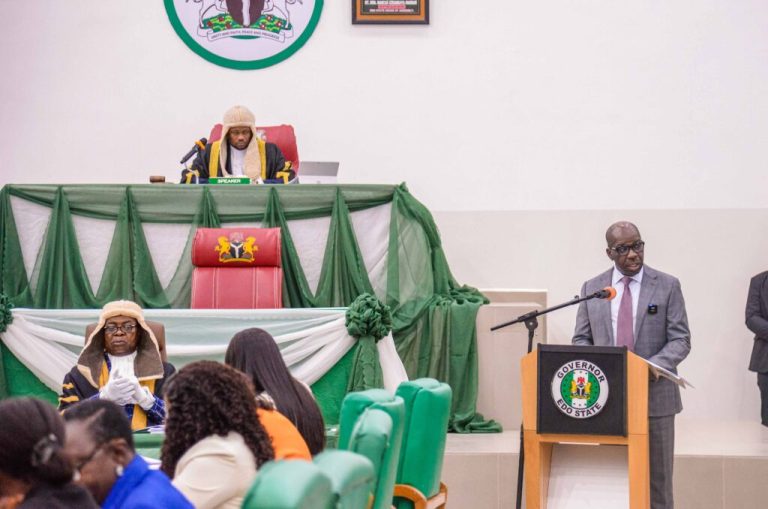 Edo State Governor Godwin Obaseki presented a N320.35 billion budget to the Edo State House of Assembly on Wednesday for the fiscal year 2023.
According to Track News, the budget represents a 69.37 percent increase over the N222 billion budgeted for 2022.

Obaseki, who presented the budget to the Assembly at the Anthony Enahoro Assembly Complex in Benin City, said it includes N192 billion in capital expenditure and N127.5 billion in recurrent expenditure.

He stated that the ‘Budget of Resilience and Transformation’ was motivated by the need to “build a resilient and sustainable foundation for the reforms, initiatives, and programs that we have embarked on over the last six years.”

“Our strategic goal is to use manufacturing, technology, agriculture, arts, culture, and entertainment as a catalyst to encourage long-term investment in all sectors of the Edo economy.”

Obaseki stated that the total projected revenue for 2023 is N300 billion, which includes N144.26 billion in statutory allocation, N41.2 billion in Value Added Tax, 46.1 billion in capital receipts, N60.4 billion in IGR, and N4 billion in grants, among other things.

The governor stated that the remaining funds will come from development financing and financial institutions.

“The revenue estimates for the budget are based on a crude oil benchmark of $70 per barrel and an average daily production of 1.69 million barrels per day, as well as an increase in Internally Generated Revenue (IGR) to N60.4 billion, owing to reforms in tax collection and land management activities,” he said.

“Our intention is to push for revenue and building-related reforms.” This year, we intend to increase capital spending. To that end, we anticipate a capital/recurrent expenditure ratio of 60.2 percent to 39.8 percent. This would revitalize the economy, providing the necessary impetus for the year’s expected growth.”

After receiving the 2023 budget proposal, Speaker of the Edo Assembly, Rt. Hon. Marcus Onobun, praised the governor for his efforts to ensure the state’s economic prosperity.

“It is commendable that you were able to deliver set goals as outlined despite the looming global economic meltdown and other uncertainties,” he said. On behalf of my colleagues, I commend you for your outstanding performance in the face of adversity. We commend your visionary initiatives, leadership, passion, strategic innovation, and commitment to our beloved state and its people.

“As a House, we will uphold the highest standards of integrity in carrying out our constitutionally mandated duty of scrutinizing and considering this budget for the benefit of the state.” We will make certain that this budget proposal is given due consideration. We will work with relevant stakeholders, ministries, departments, and government agencies to deliver an exemplary budget that is focused on the aspirations and needs of the people of Edo State.”

Previously, the governor identified education, health, road transportation, buildings, agriculture, energy, and electricity, as well as economic enablers, as areas of focus for the fiscal year 2023.