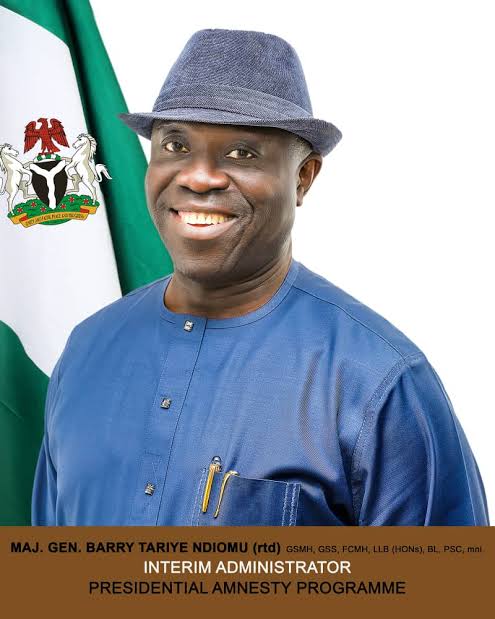 ..As he publishes details, Names of fraudulent duplicate payments made by his Predecessor

The dilemma in the Presidential Amnesty Office is far from being over; even with the appointment of the new Interim Administrator, Major Gen. Ndiomu Rtd.

According to an impeccable source “In the last few months, various petitions, and accusations have come from individuals claiming to be beneficiaries of the programme. This might not be unconnected to the recent clampdown of ghost payments made by the previous administration in the Amnesty Office which has caused the current backlash on the Interim Administrator, Major Gen. Ndiomu Rtd .

The unsullied source said, “Just recently, the amnesty office under the leadership of Major Gen. Ndiomu Rtd. released a list of names who have been receiving duplicate payments from the office. This fraud was carried out through payments to pseudo names, which after BVN verifications, it was discovered that multiple entries had the same BVN linking to individuals and bulk payments to group heads, which after scrutiny, it was realized that the actual beneficiaries never get their stipends.

“This mismanagement has been going on for close to 2 years and might be a reason for the termination of Milland Dikio’s administration.

“The last administration in the amnesty office had numerous issues, ranging from this recently revealed diversion of stipends and companies owned by aides of the then Interim AdministratorIA being awarded contracts for doing nothing. These contracts ran into billions of Naira.”

Advertisement
Related Topics:Reason for the backlash on the current amnesty boss emerges
Up Next