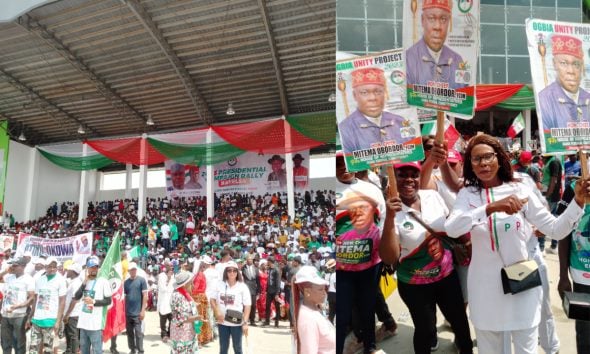 The presidential candidate of the Peoples Democratic Party, PDP, Atiku Abubakar, has assured the people of Bayelsa State and Nigeria that he will engage in efforts that will end insecurity in the country if elected as President of Nigeria in the forthcoming 2023 general elections.

He also promised that his government will focus on restructuring the country.

The former vice president made the promises at the presidential campaign rally of PDP on Monday, at the Oxbow Lake Pavilion, in Yenagoa, the state capital.

He reminded the people that from the beginning of democracy Bayelsa State has been a bastion for PDP, and there was no need to leave the party for an opposition party because the state is one with the party

He said: “The future of the state and Nigeria is tied to PDP. I will unify this country because we have never been this divided. I will give everyone a sense of belonging if elected.”

“I will restore security, tackle the economy of the country; if you recall, from 1999 to 2015, we were the biggest economy of Africa, but since the inception of the APC the country has suffered economically. There’ll be no more ASUU strikes when I am in power, and our students will continue to grow educationally like their peers in other countries.”

He further stated: “The people of the Niger Delta region need more restructuring than any part of the country. You will not need any government assistance at all times. I will need your support, and I assure you that we will lift the living condition of the people in the country.”

Bayelsa State Governor, Senator Douye Diri, reminded that the PDP has once produced a president of the country from the state, adding that the only candidate who has keyed into what the Ijaws and Bayelsans want is Atiku, who has always talked about resource control

Advertisement
Related Topics:2023 elections: I will implement restructuring – Atiku promises Bayelsans
Up Next