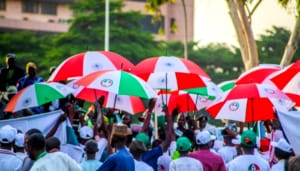 The Peoples Democratic Party (PDP) launched its Presidential Campaign Council (PCC) in Ekiti yesterday, urging people to vote for the party’s candidates across the country in the 2023 general elections.

Mr Eddy Olafeso, former Zonal Chairman of the South West PDP, who inaugurated the council in Ado-Ekiti, urged PDP members in the state to unite and work for the party’s victory in the upcoming election.

Olafeso stated that Nigerians had witnessed the worst Christmas in the country’s history and urged voters to use their Permanent Voter Cards (PVCs) to vote for the party’s Presidential and Vice Presidential candidates, Atiku and Okowa, in order to effect the desired change.

Olafeso, who also inaugurated the state Campaign Manager Committee, criticized the ruling All Progressives Congress (APC) for its leadership style, claiming that Nigeria had been plunged into numerous problems with no solutions.

In his address, Chief Ogundipe Makanjuola, Acting Chairman, Ekiti PDP PCC, stated that what is required is the unwavering commitment of party members to winning the Presidential election in the next two months so that the PDP can rebuild Nigeria’s battered economy.

Makanjuola urged PDP supporters to go out and vote for the party and all of its candidates in the election.

“We have been given a very strategic task, a very challenging assignment, but it is not insurmountable, and we will succeed,” he said.

Related Topics:Ekiti: PDP establishes the Presidential Campaign Council
Up Next

Tinubu will be elected in 2023 – APC campaign coordinator.