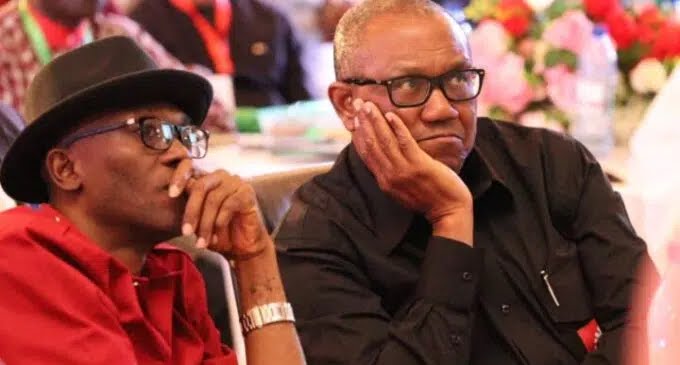 Some Labour Party (LP) members in Ogun State have backed the party’s presidential candidate, Peter Obi, and his campaign Director-General, Dr Doyin Okupe.
According to Track News, this comes after the Ogun State chapter suspended Okupe and accused Obi and the party’s National Chairman, Julius Abure, of being sectional in the selection of the party’s leadership.

According to the group, the issues they raised amounted to infantile tantrums that were never discussed at the party’s state executive meeting prior to the press conference.

“The attention of some of us in the leadership of the Labour Party in Ogun State, especially members of the State Exco and Party Leaders, has been drawn to an orchestrated, reckless, and divisive news conference of some Officials of Ogun State Labour Party led by Micheal Ashade, State Chairman, and his cohorts against the National Leadership of our Great Party,” the faction said.

“In fact, all of the allegations raised at the conference could have been resolved internally without the need for a press conference.” So, this action was clearly unnecessary, condemnable, and unfortunate, and we suspect it was orchestrated by some disgruntled elements within and outside the party who are hell-bent on de-marketing the Labour Party and its national leadership ahead of the 2023 elections.

“To be clear, the Presidential Campaign Council, PCC, is the prerogative of the Presidential Candidate and the National Working Committee, NWC of the LP, and since the PCC has been approved by the NWC, no member of the party has the moral right to call for its dissolution.”

“Again, the issue of national spread has been addressed as far as we are concerned, as Obi is from the SE, Datti is from the NW, and the DG is from the SW.” As the North is not complaining, no one should be seen crying more than the bereaved.

“On the issue of not including Mr Abayomi Arabambi (embattled National Publicity Secretary from Ogun State) in the PCC, this can be addressed amicably rather than these elements making a mountain out of a mole hill.”

“To that end, we wish to distance ourselves from the unruly hatchet job of these Labour Party Exco Members in Ogun State and hereby reaffirm our confidence in the leadership of Comrade Barr Julius Abure, the National Chairman, and Mr Peter Obi, the Presidential Candidate, as well as the current leaders of the Labour Party Presidential Campaign Council.”

“On our candidates’ court issues, the National Leadership has assured us that no stone will be left unturned and that they are determined to prevent any officer of the party from extorting, defrauding, or manipulating unsuspecting candidates on the basis of the party’s legal actions.”