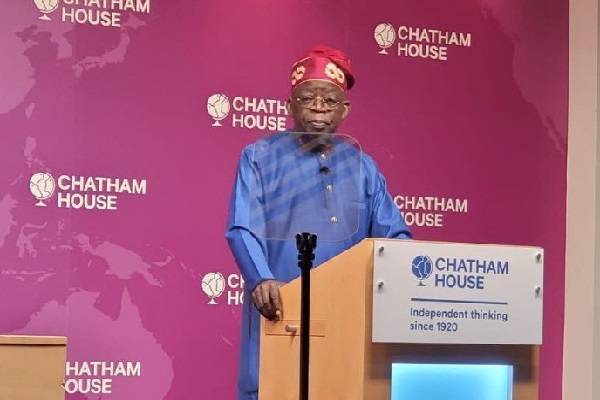 The South East spokesman of Bola Ahmed Tinubu Presidential Campaign Council Josef Onoh has said that the much-touted delegation of subordinates by Tinubu to speak at the Chatham House, United Kingdom lecture was a creative license extended by the presidential candidate to empower his team for works ahead after electoral victory.

He recalled that, unlike the Peoples Democratic Party (PDP) presidential candidate, Atiku Abubakar‘s blackout at the same Chatham lecture, Tinubu’s delegation of duty was a core component of leadership in getting work done through others meant to overcome most of his political obstacles and general life’s challenges, adding that Tinubu believes in empowering his team and giving them a creative license which also helps to organize for the remaining assignments ahead of campaign trips.

Responding to the Atiku Support Organisation (ASO) attack on the All Progressives Congress (APC) presidential candidate’s outing at the Chatham House, Onoh said that the opposition presidential candidates of the PDP and the Labour party’s reluctance in the delegation of duties was a belief in the old adage that says, ‘If you want something done right, you must do it yourself.’

He noted the major reason why the other presidential candidates clearly under-delegated tasks during their campaigns and media appearances was the fear of failure in putting important tasks in someone else’s hands.

“They feel that proper delegation takes longer than simply doing the task themselves and others even question their own ability to choose the right person for the task at hand. However, Asiwaju realised the benefits of delegation and made it his core method to overcome most of his political obstacles and general life’s challenges,” he said.

He retreated that Tinubu’s master stroke was demonstrated in London where he showcased his belief in delegating assignments and team spirit is driven to succeed and proved he was ready to take charge of Nigeria come 2023; proved that his subordinates will be capable of taking more projects than he can handle alone, adding that the fear of failure is the reason the opposition party presidential candidates avoid delegation and wondered how they hope to move the nation forward with such practice.

Onoh said: “The PDP and LP presidential candidates are busy juggling priorities at the same time, if it is not the PDP G-5 issues or running back to his country and home in Dubai, the other is busy quoting wrong statistics hence they’ve kept making mistakes. Delegating tasks to the right individuals is important and in the case of Asiwaju’s choice to delegate at Chatham house allowed him to focus on planning and organizing for the remaining assignments ahead of his trips.

“Unlike other presidential candidates who failed to delegate adequately during this campaign period, they have shown both the electorates and Nigerians that their team consists mainly of characters who are afraid to take initiative or who feel apprehensive about bringing new ideas to the table, which is a clear deviation of Tinubu’s style of politics. Asiwaju Bola Ahmed Tinubu is a presidential candidate and incoming President of Nigeria that I can boldly say delegates tasks adequately which has helped build trust both in our Presidential Campaign Council, and beyond, hence that trust is driven even further because Asiwaju remains open for communication and listening.

“Our presidential candidate truly felt that the skills and talents as demonstrated by the various speakers he delegated at Chatman House were put to good use. They were engaged and happier after which their happiness was expressed during the lovely evening dinner, the ambiance said it all it stimulated creativity and developed the skills of our team.

“Asiwaju Bola Ahmed Tinubu, the Jagaban, the one, and only city boy remains a leader who gives his team members the freedom to tackle delegated tasks in their own way, he believes in empowering his team and giving them a creative license. This personal initiative of Asiwaju has led to creative breakthroughs, which today have benefited everyone involved, I inclusive, and it has helped team members of our presidential campaign council build some very specific skills along the way and created a positive business culture of renewed hope for Nigeria.

“Perhaps the best reason why Asiwaju delegates tasks to others have to do with the type of political and business culture and style of leadership he has been able to create which has helped to boost our morale, improve efficiency and productivity, and promoted enthusiasm, innovation, and cooperation – all of which are vital to the Renewed hope Nigeria project. Chatham House’s outing proved that Asiwaju has a group of highly qualified team who are experts at getting the job done right.

“Asiwaju’s method of delegation is vital to the success of Nigeria come 2023. He is a leader who remembers that it is not a way to push off unsavory tasks to others. What’s more, he’s a leader who doesn’t micro-manage delegated tasks. He delegates effectively and offers communication and support and makes allowance for autonomy and creativity at the same time.”