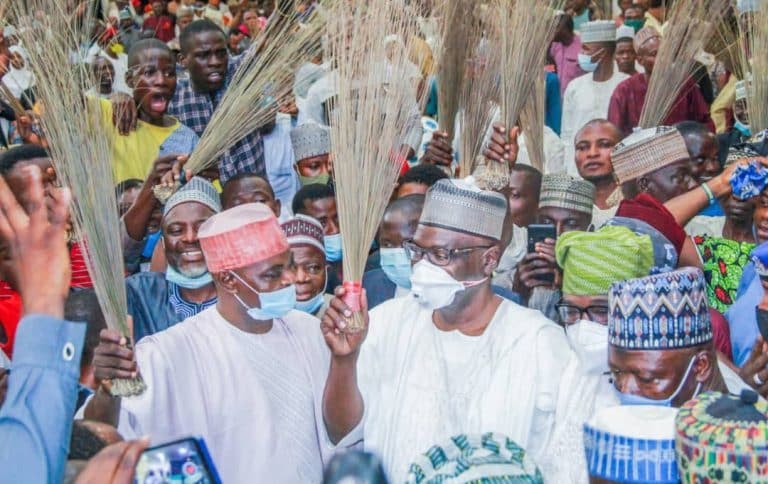 The All Progressives Congress (APC) in Kwara State received a boost on Thursday when top leaders of the opposition Peoples Democratic Party (PDP) defected to the ruling party.
According to Track News, a former Deputy Speaker of the Kwara House of Assembly, Mathew Okedare, and a former Commissioner for Tertiary Education, Abdullahi Alikinla, withdrew their membership from the PDP yesterday.

According to reports, the party chieftains were among other strong supporters of opposition parties in the state who pledged allegiance to the APC on Thursday, November 25, 2022.

At least ten thousand (10,000) former opposition members reportedly joined the APC in the state yesterday. Musa Yeketi, former Commissioner for Education, Science, and Technology, and Personal Assistant to former Governor Abdulfatah Ahmed on Political Matters, are among those who have defected.

The defectors included leaders of the Social Democratic Party (SDP) and the African Democratic Congress (ADC), according to Track News.

.
Top government officials and party leaders, including the state APC Chairman, Sunday Fagbemi, and the Director General of the APC Campaign team, Alhaji Yahaya Seriki, were on hand to welcome the new members.

Governor AbdulRazaq praised the defectors for their brave decision and assured them of fair and equal treatment within the party.

The governor outlined some of his administration’s accomplishments in various sectors and urged APC members to remain committed to delivering the state in the 2023 general elections.

Fagbemi, for his part, stated that the people of Kwara have all seen the vast difference between the previous and current administrations in terms of inclusive growth and good governance and have vowed never to allow the state to regress.

He described the PDP’s comeback bid as evil and intended to deny citizens what they were already enjoying under AbdulRazaq, restating the government’s scorecards across sectors.

Related Topics:Others Switch to APC in KwaraTop PDP Chieftains
Up Next

‘Isoko will vote in large numbers for Tinubu, Omo-Agege