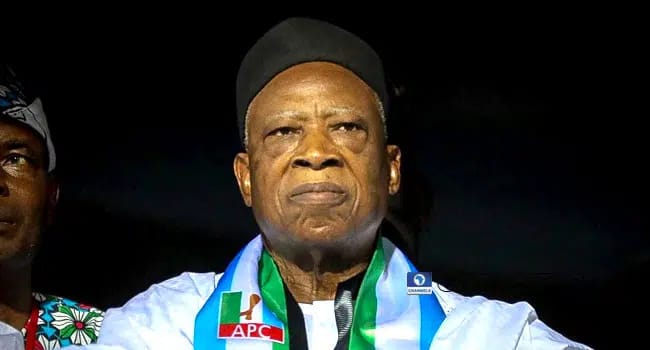 The All Progressives Congress (APC) National Chairman, Senator Abdullahi Adamu, has been chastised by the Labour Party for his stance on the use of the Bimodal Voter Accreditation System (BVAS) for the 2023 general election.

According to Track News, Adamu was concerned about the use of BVAS and other technology to transmit results electronically in next year’s general elections.

On Wednesday, Adamu raised the issue with a Commonwealth delegation on the 2023 general election in his office at the party secretariat.

However, in a statement released on Thursday, APC Spokesman Felix Morka stated that the ruling party would never oppose the use of technology in the 2023 election.

Morka claimed that during Wednesday’s meeting, the party’s national chairman was quoted out of context regarding his position on the use of BVAS and other technology.

In an interview with The Punch on Thursday, LP Spokesman Abayomi Arabambi argued that Adamu’s stance was a subtle strategy aimed at putting pressure on the electoral umpire to throw out the BVAS.

Arabambi claimed that the statement claiming Adamu recanted is proof that the APC is afraid of losing the 2023 election.

“It is clear that the APC is nervous,” he said. This is a strategy to put pressure on INEC, but it will fail. The APC is not the only political party running in the 2023 election. For the mere fact that they claimed the man recanted indicates that they are concerned about losing the election.

“I believe the man was rational before complaining about the BVAS, which is the only solution to election rigging.” Even INEC has stated that there will be no going back.

“Does only the APC want to run for office in Nigeria?” They do not own the country or the electoral system. They came in via the electoral system and will be removed via the same mechanism. “Whether Adamu recanted or not is an afterthought in our eyes.”

SDP Responds
Rufus Aiyenigba, National Publicity Secretary of the Social Democratic Party, urged INEC to stick to its decision to use technology to transmit election results in 2023.

He went on to say that the governorship elections in Ekiti and Osun states demonstrated how important the BVAS is to the electoral system.

“INEC has demonstrated its apolitical nature in recent years, and the SDP will continue to support the commission, particularly in its use of technology to improve the conduct of our elections.” We are ready for the elections as a party. “Anyone or group putting pressure on INEC is an enemy of our democracy,” he declared.

Related Topics:2023: LPIReVSDP Call Adamu Out Over BVAS Concerns
Up Next